While our official press report of the AWS Re:Invent 2016 conference that took place in Las Vegas two weeks ago went already live at our publishing house heise.de (here’s our report in German language), we also took the time to have a look at the many vendors in the huge exhibition and will point out a few that we consider “vendors to watch”.

One of those vendors to watch is Observable Networks.

What makes Observable Networks a Vendor to Watch?

One ingredient in Observable’s secret sauce is its endpoint modeling technology that includes a cloud-based service platform incorporating automated security analytics and real-time traffic sensors which continuously model all devices on networks of any size. 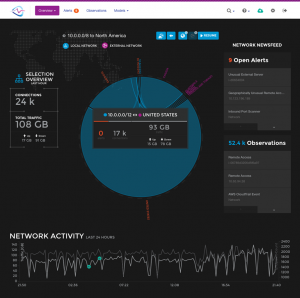 Why we believe Observable Networks are among the best in show in security
Observable Networks cleverly utilizes AWS VPC Flow logs enabling users to bring security processes in the AWS environment close to those in a conventional IT environment. By coupling flow logs with Endpoint Modeling and building a model of “normal” activity from observed device behavior, they can easily spot changes in behavior  which can signal misuse, malware or compromise.

Our resume of what we’ve seen at the show: overall, Observable Networks provides increased visibility, which leads to improved security – simply and cost efficiently using the VPC flow logs.