Thursday 11th October saw the close of the third European Cloud Foundry Summit in Basel, Switzerland, once again strongly attended by around 1,000 developers, architects and engineers from across the globe, as well as 170 speakers and sponsors.

Abby Kearns, Executive Director of the Cloud Foundry Foundation, gave an opening keynote presentation in which she outlined the most recent events in the life of this four-year-old community.  The Summit heard of the key role being played by Cloud Foundry at Volkswagen, who began with no in-house application development capability two years ago, and now have 250 developers, and 2,400 Cloud Foundry instances in five regions – servicing a million customers across the 12 VW brands. Similarly Allianz, who have used the agility of Cloud Foundry to reduce application deployment times from days to minutes.

It was announced that INDICS, China’s first industrial internet platform will be powered by Cloud Foundry.

Cloud.gov was also newly announced as the first provider of Cloud Foundry based environments to US Government agencies.

The Foundation also announced the creation of a Cloud Foundry Certified Systems Integrator program, intended to help integrators, consultancies and professional services organisations highlight their expertise at working Cloud Foundry technologies.  Certified Systems Integrators will be able to promote their services through The Foundry, which is now the largest open source marketplace in existence.  The Foundry was launched last year with some 560 services, now has some 5,600+ offerings, and is the site in the Cloud Foundry ecosystem that attracts the most traffic.

SUSE announced that a new Kubernetes-native implementation of the Cloud Foundry development model is coming to the SUSE Cloud Application Platform.  SUSE will include technology from the Eirini project (see below).

Last year’s summit saw the release of the Cloud Foundry Container Runtime (CFCR), which uses the CF BOSH toolchain to deploy Kubernetes clusters into the cloud. As well as easing the burden of deploying Kubernetes, CFCR uses BOSH to improve the Kubernetes experience by adding capabilities such as high availability, scaling and monitoring, health management, and the ability to perform rolling upgrades of the Kubernetes estate.

This year, the Foundation announced two new projects, which further enhance the interoperability of Cloud Foundry and Kubernetes.  The first project, CF Containerization, has the goal of packaging CF BOSH releases into containers, and deploying these to a Kubernetes backend. This allows the CF Application Runtime itself to be deployed in Kubernetes rather than VMs – thereby requiring significantly less infrastructure resources.

The second project, Eirini, is principally an interface which will allow Kubernetes to be used as the scheduler for the CF Application Runtime on containerized CF. That said, Eirini is designed to be generic and extensible and thus not bound to Diego or Kubernetes alone. Eirini will enable developers to ‚cf push‘ their applications to CFAR when this is running on a Kubernetes cluster, and thereby enjoy the same speed, flexibility, and ease of application deployment in both PaaS and containerized CF environments.

Given the popularity of Kubernetes, and given that (as reported in a June 2018 CF Foundation survey of IT Decision Makers), 64% of respondents are using a combination of PaaS and containers together – the potential gains for developer productivity are clear.

In his closing keynote presentation Chip Childers, CTO of the Cloud Foundry Foundation, spoke about the multiple abstractions that cloud users are faced with today (CaaS, PaaS, FaaS and Virtual Machines), and the key Foundation objective of „helping businesses to become good at making software“. Reaching this objective involves an inevitable balancing act in which the Foundation must simultaneously embrace and encourage innovation, but must also choose between those innovations responsibly.

Speaking specifically about CFAS and CFCR he said, „the foundation wants to provide a consistent experience for developers who want to work with both abstractions“.  CF Containerization and Eirini are steps towards that goal.

The Cloud Foundry Foundation has announced that the 2019 European Summit will take place in The Hague, Netherlands on September 11-12 2019 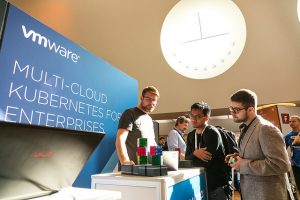