First of all, let’s quickly summarize, what we are going to do in this blogpost:

Setting up the ECS cluster

To set up a cluster we’ll have to switch to the ECS menu. When you use ECS for the first time, it will lead you to the “first run” wizard, which allows you to deploy a sample application on an EC2 cluster. This will result in something similar to what we are trying to achieve in this blog post. However, as you will not rely on the wizard in the future, you should know how to configure ECS yourselves.

In case you would like to return to the wizard, just enter the following URL (here for the us-east-1 region):

As we are setting up everything ourselves, let’s click on Cancel here. This will lead us to the main view, which looks rather simple (see screenshot). The “Create Cluster” button already leads us on the right track. 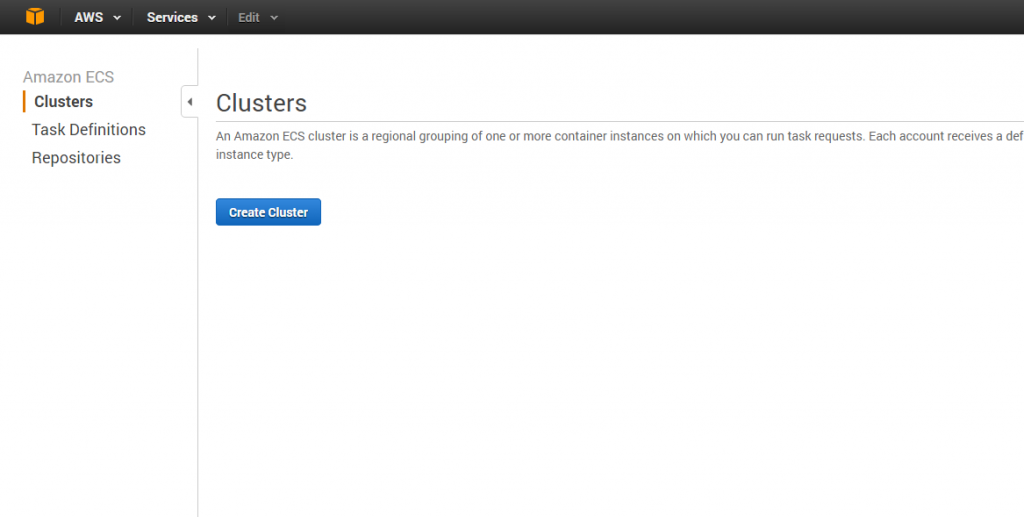 After supplying a cluster name (here “soeldner-consult”), click on Create. 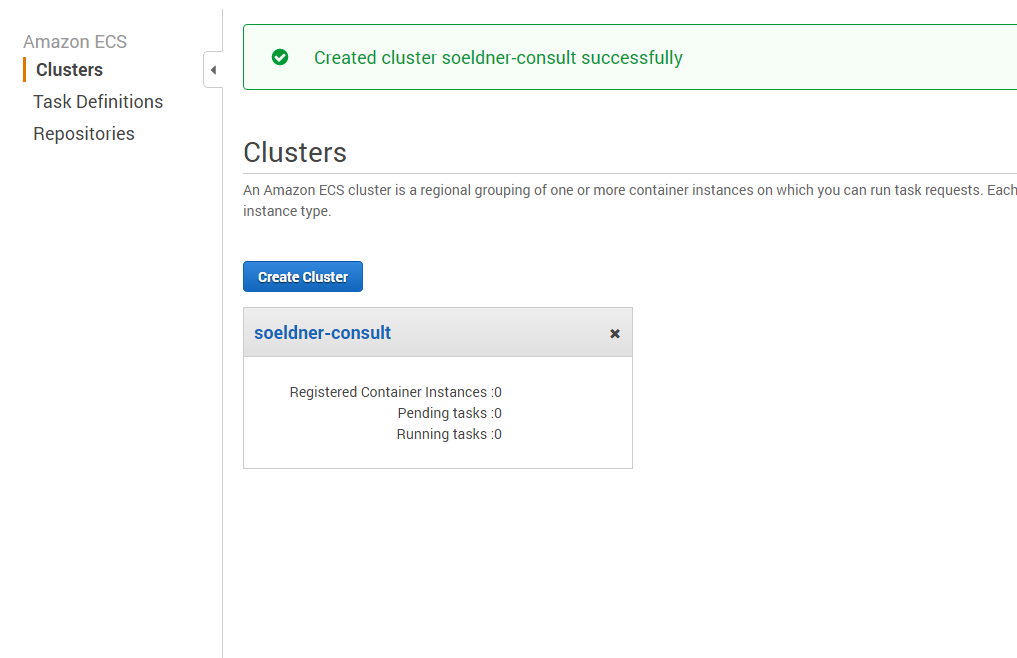 If you already have some experience with ECS, you might just setup the task definition by providing a JSON definition. If not, the basic configuration can also be done graphically. First of all, we need to give the task definition a name, in this example we’ll call it httpd. This name already describes the purpose of this task definition, namely being a template for a httpd container (httpd is the container image for Apache). A task can also consist of multiple containers, thus defining different components for an application.

Within a task definition you can define multiple containers. Each container is based on an image which will be run in the container. Fortunately you’ll already have access to all images stored in Docker Hub. To explore what else is available in Docker Hub, just follow this link: https://hub.docker.com/

However, you could also reference images from your own repository provided by ECR (Amazon EC2 Container Registry). We will show how to work with ECR in a later post. 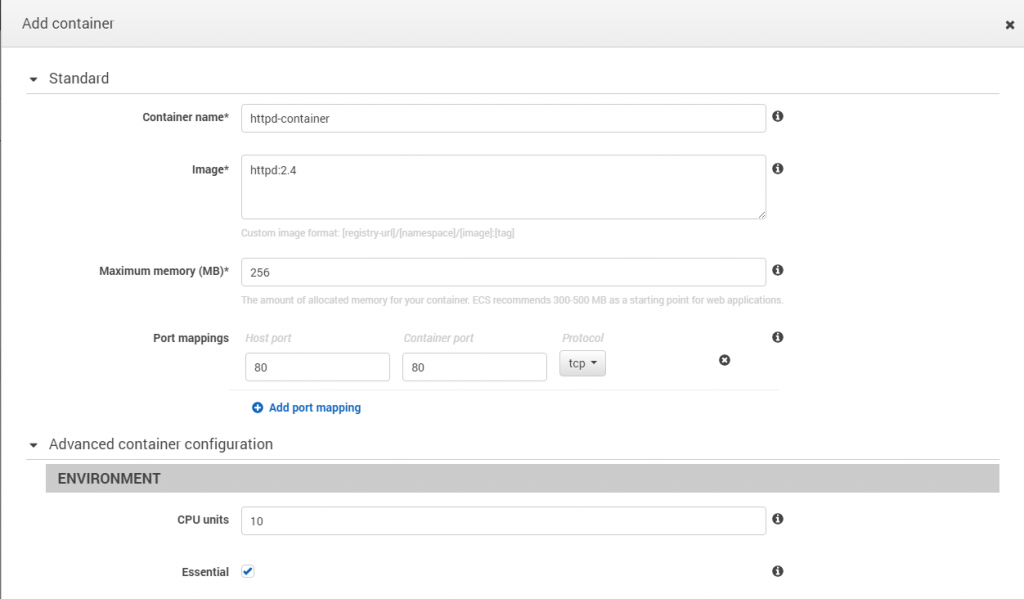 Fill out the following fields:

Scroll down a little bit and fill out the command section with the following command: 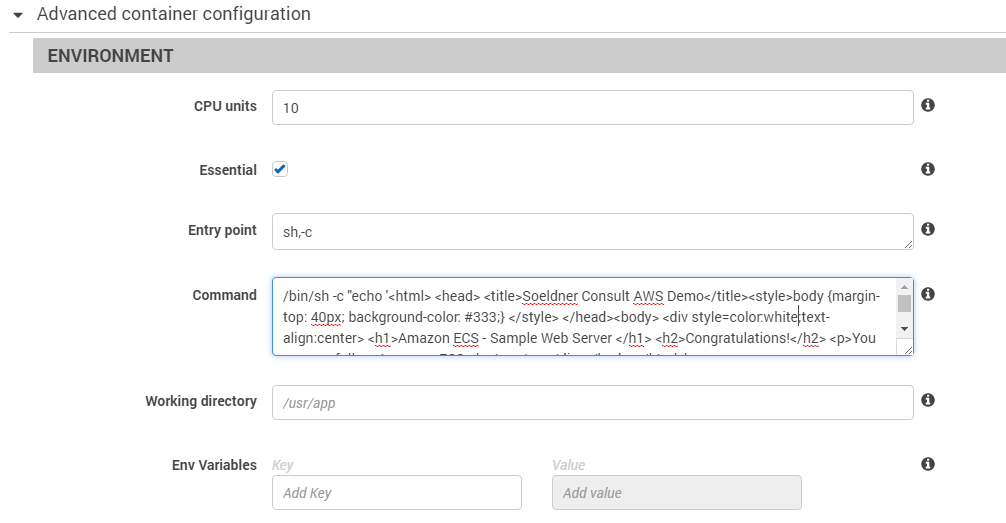 After filling out these fields, click on ‘Add’ to close the window and then click on “Create” in order to save your task definition.

As the task definition is merely the ‘template’ which is used to set up one or more container instance, you still need to specify how many tasks should run based on this task definition. To achieve that, we will in the next step create a service.

With the new ECS role, we now have all the prerequisites to set up an EC2 container instance which will become part of our cluster.

AWS already offers an AMI (Amazon Machine Image) containing the ECS container agent which already waits for us to be deployed. The Docker AMI is part of the Community AMIs, which can be selected when launching a new EC2 instance. The best way to find it is by searching for amazon-ecs-optimized. However, you’ll get multiple results with different versions of the container agent as well as of Docker. For an overview of the different versions, you can check out the ECS documentation (http://docs.aws.amazon.com/AmazonECS/latest/developerguide/container_agent_versions.html) 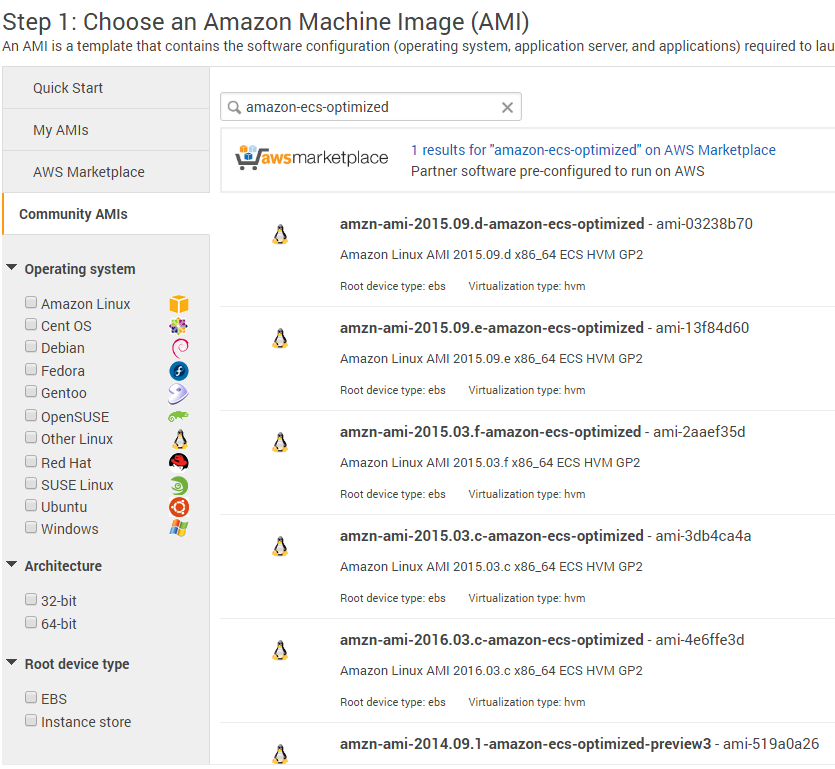 You can set up the EC2 instance according to your liking. We’ll skip a couple of steps here, such as the selection of the instance type, as it is completely up to what size your EC2 machine should have (I am taking the t2.micro instance, as it is part of the AWS free tier). However, there are a couple of things you should pay attention to:

The user data script in this case just sets the ECS_CLUSTER parameter to soeldner-consult. If you do not set this parameter, the machine will automatically try to register to the default cluster after booting (in case you have a default cluster). 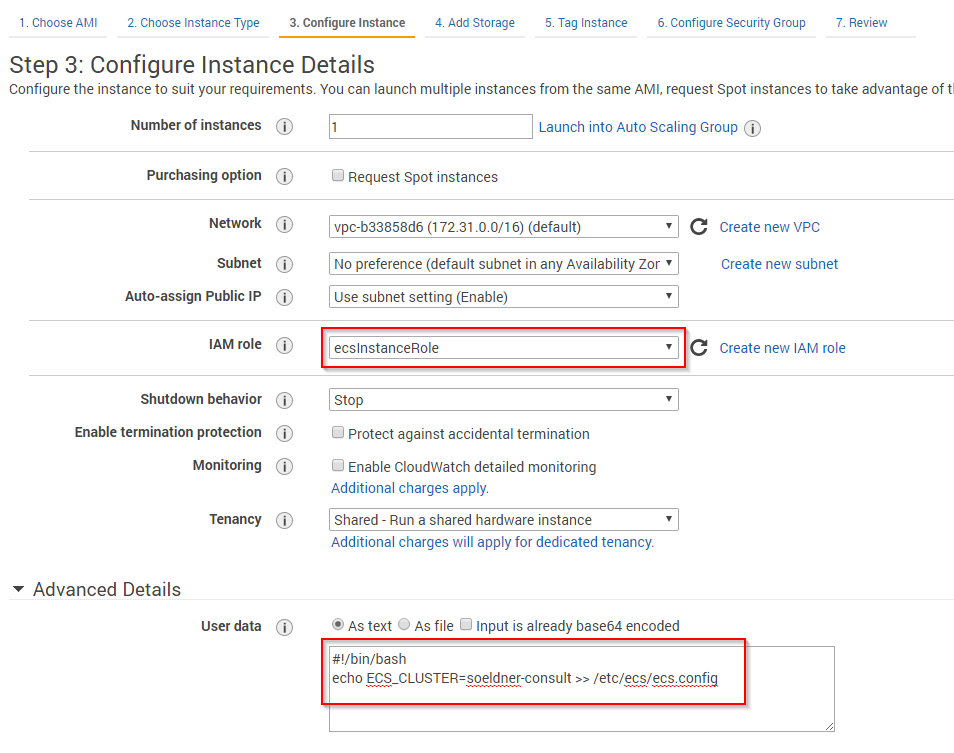 The next steps are pretty straightforward and do not differ to other EC2 instances (like setting up a volume, select a key pair…). Therefore, we do not cover it here in detail.

After you launched the new instance, wait a little bit to make sure it is up and running, and a public IP address is assigned to it.

With our EC2 container instance in place, we can now continue to create a service in ECS. Once again, if you forgot, what a service in ECS is, just have a look again at the first part of this article series (Click Here).

After returning to the ECS menu, go to your cluster by clicking on “Clusters” on the left side and then select your cluster (in our case “soeldner-consult”. Under the Service tab, click “Create” 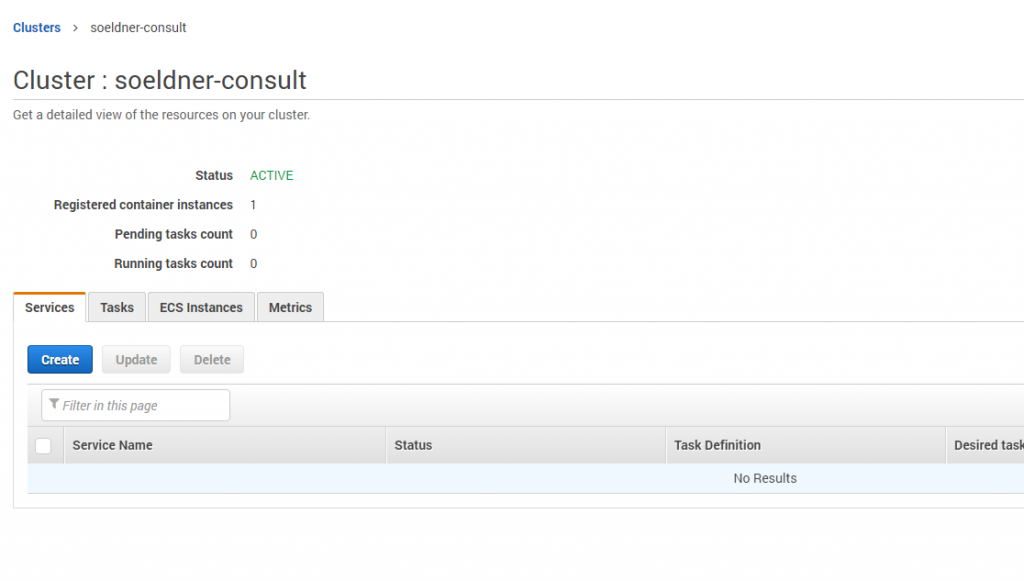 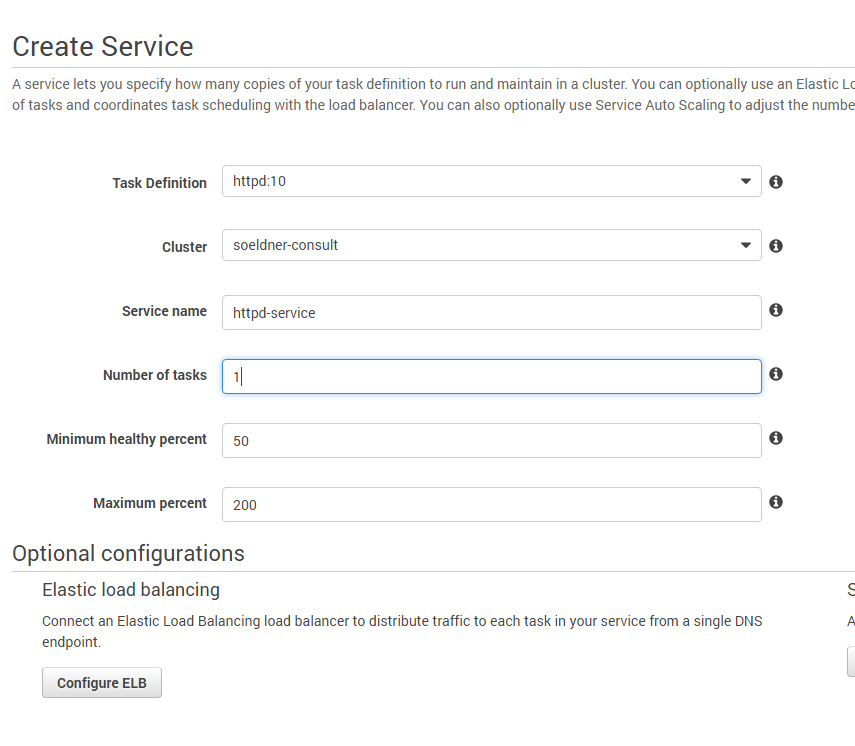 In order to have one instance of your task running, set “Number of tasks” to 1. After that click on “Create Service”. In the next window you will see that the service was successfully created: 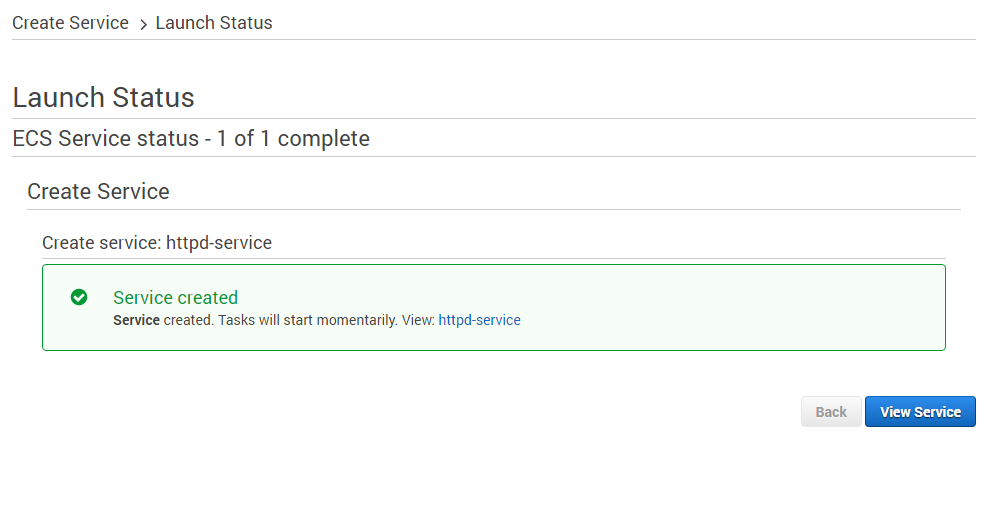 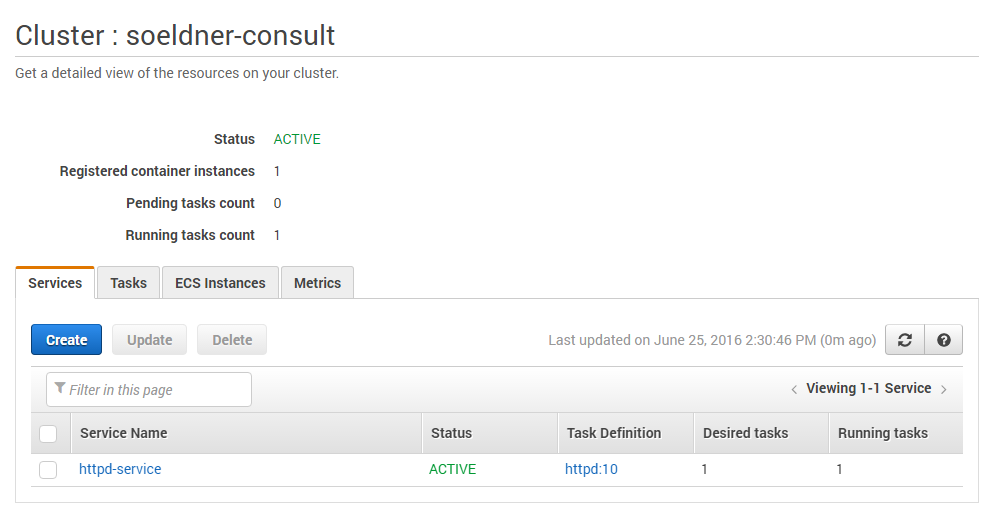 So far, this looks quite good. In order to see whether your web server container is really up and running, let us just switch to the web browser and see, if the web site has been properly set up. Just find out the public IP of your EC2 instance (see the screenshot) and copy it into the browser bar.

If everything works properly, you should get a similar output: