Besides these core components, there are additional appliances and components which extend the functionality of vRealize Automation:

In addition to these components, there is also the need for further software components. For the IaaS components, an instance of SQL Server is required. Microsoft Active Directory is needed as an authentication source for the Authentication Services.

Many customers want to dynamically provision networks. In that case, VMware NSX can be used. In the recent versions, vRealize Automation has significantly enhanced its integration with VMware NSX to provide even more virtual networking and security capabilities.

The different components are depicted in Fig. 1

The appliance is the heart of vRealize Automation. Introduced with version 6 of the product, it hosts the user interface, the self-service portal, an Orchestrator instance and now also the Authentication Services. Internally, it is based on the following components:

The IaaS components must be installed on a Windows machine and are certainly the most difficult ones to understand, install and maintain. The following set of IaaS services and web sites are required to run a vRealize Automation environment:

It is worth noting that despite the product name having changed to vRealize Automation in 2014, some of the component names still reference to “vCloud Automation Center”.

Basically, VMware wants to migrate the IaaS components to the Linux appliance in the long term. Historically, vRealize Automation was a pure Windows product implemented in Microsoft .NET up to version 5.2 There is still a long way for the transformation and we can only expect to see running everything on Linux in one of the next releases.

In the following we want to discuss these components in detail.

The model manger represents the heart of the IaaS components. Running within IIS, its basic tasks are to encapsulate the Microsoft SQL Server database and provide access to the IaaS data via web services. Furthermore, all information, logic or any other artifacts that are needed to execute workflows on external systems (like VMware vSphere, Microsoft System Center Virtual Machine Manager, Cisco UCS Manager, etc.) are stored within the Model Manager. Distributed Execution Managers (DEMs) use this information later on to provision IaaS resources. For high-availability reasons, the model manager can have multiple instances that run on different hosts within the vRealize Automation environment. Internally, the Model Manager has the following components:

We just mentioned that all data is stored within a Microsoft SQL Server and there is a REST web service to retrieve this data. The interface helps to expose the data as entities. Internally, the REST interface is implemented by means of the Microsoft .NET framework. If there is the need to directly interact with the model manager, using the REST interface is certainly the easiest way to do so – we will show that later in chapter X (however, remember that the Linux appliance also exposes most of the data via its own REST interface, which should be used when possible).

The model manager also stores permissions, such as who is able to see what kind of data and which actions can be invoked on an IaaS resource.

We have already discussed that vRealize Automation provides the means to provision resources to different platforms (physical, virtual and cloud environments). However, depending on the underlying platform and the provisioning technique, there is the need to have different workflows stored in the model manager. It is also possible to extend these built-in workflows with custom logic. Indeed, there are plenty of use cases for that and we will deep-dive into that topic later in the extensibility section of the book. Typical use cases for extending the build-in workflows are registering a machine within a Configuration Management Database (CMDB), integrating the machine into a Puppet environment or running a custom script after provisioning.

Another important functionality of the model manager is to register custom events within the data model. There are also plenty of use cases for that. For example, if you change a property of the machine from the self-service portal, it might be nice to have a trigger installed that automatically forwards such changes to a CMDB database.

The vCloud Automation Center Manager Service runs as a Windows service and is responsible for the interaction between Model Manager, database, vRealize Automation agents, Active Directory and SMTP. There is not much to configure in this service, however, you must make sure that this service is running just once. When installed, it must be ensured that the service has administrative privileges to run on the IaaS host. 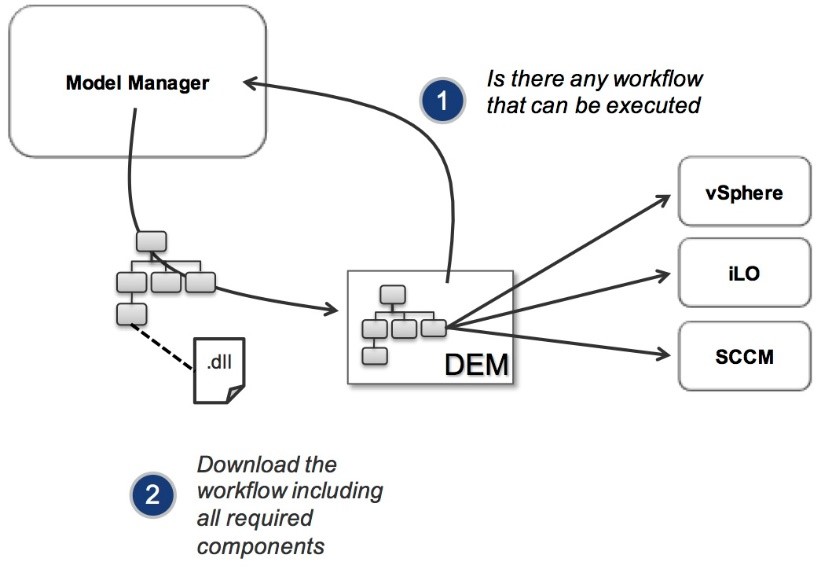 Before being able to run the installation wizard on the Linux appliance, administrators must ensure that the vCloud Automation Center Management Agent is installed on every Windows machine. The basic task of the agent is to collect support and telemetry information and register IaaS nodes with the vRealize Automation appliance. As well as the manager service, the management agent is installed as a Windows service.

As discussed, DEMs interact with external systems in order to run workflows on them. Unfortunately, in some cases they lack the knowledge to interact directly and need the help of agents. This is especially true for hypervisors (like vSphere, Hyper-V), which were implemented in the first versions of vRealize Automation (support for other hypervisors like KVM, Redhat Enterprise Linux OpenStack, Amazon Web Services, Dell iDRAC or Cisco UCS was later directly implemented in the DEM). Right now, there exist several different kinds of agents:

As a conclusion, Fig. 3 shows the interaction between the different IaaS components. 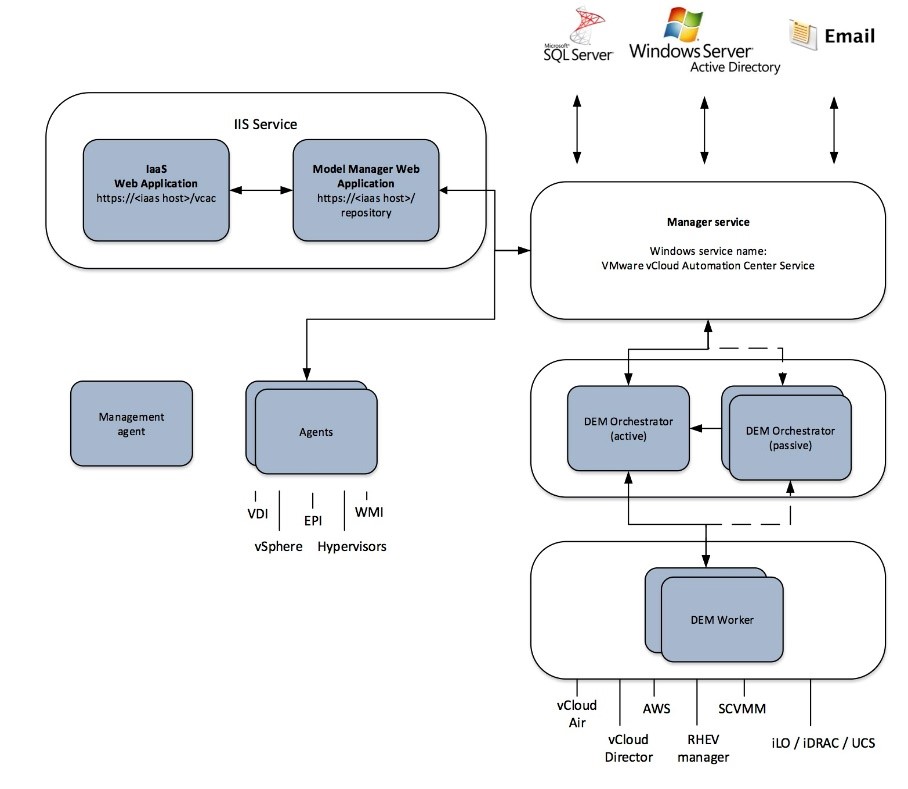 The Authentication Services support a single Active Directory (AD) or a multi-domain AD forest. Multi-forest enables you to deploy multitenant configurations. Multitenancy refers to the ability to have segregation for authentication and most of the vRealize Automation resources and configurations, so that you can support multiple customers or companies. There is no 1:1 relationship between a tenant and a domain. With the Authentication Services, it is possible to connect multiple domains to a single tenant as well as to map a single domain to multiple tenants.

It also made sense to natively integrate the Authenticate Services from a branding perspective. All the security-related screens such as login-screens have the same look-and-feel like the vRealize Automation self-service portal, but can – of course – be customized.

The Authentication Services also support adding additional layers of security to the self-service portal. There is native support for 3rd party SAML Token as well as out-of-the-box smart-card and multi-factor authentication capabilities. 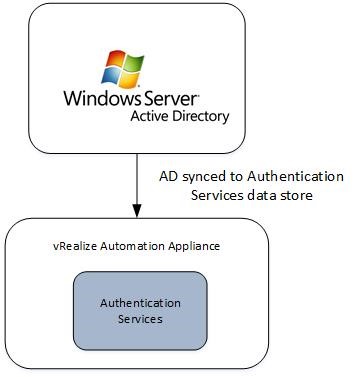 You can use Orchestrator for different technical use cases.

Firstly, if you want to provision XaaS services to the service catalog, the underlying workflows must run in Orchestrator. From a developer’s point of view, the first step is to create these workflows in Orchestrator. When you are finished with that, the next step would be to build a graphical frontend with the Advanced Service Designer (ASD) and then to publish the workflow to the service catalog. There are many use cases for the ASD and we will cover some of them in chapter X. Under the hood, Orchestrator already ships with over 300 different workflows, so that in many cases you don’t need to create a workflow from scratch, but can modify existing ones.

You also need Orchestrator if you want to customize the way machines are provisioned. There are really plenty of use cases for that. For example, if you are not happy with the hostname and IP address assigned by vRealize Automation, you could call a workflow to invoke an IP address management (IPAM) tool such as Infoblox instead. Many companies also need to register their resources into a configuration management database (CMBD). There are plenty of other scenarios where Orchestrator would be the right component for customization – we will talk more about them in a later chapter. Fig. 5 shows the machine lifecycle of a virtual machine in vRealize Automation and the separate stages where customization can occur.

In addition, Orchestrator is also required for NSX configuration within vRealize Automation.

The new release of Orchestrator has a lot of new noteworthy features integrated. Most important, there is a new event broker available that allows to subscribe to lifecycle events, allows blocking and non-blocking subscriptions and makes the old .NET based lifecycle callouts obsolete. In addition, vRealize Orchestrator offers a new Control Center for monitoring workflows and troubleshooting.

In most environments, it is important to have insight into your costs (i.e. to find out ‘who’ is responsible for what costs and show these costs in a transparent manner). Showing costs was already possible with vCloud Director: There was a tool called vCenter Chargeback manager. From vRealize Automation 6 onwards, VMware shipped vRealize Business Standard as a dedicated tool for cost showback and price calculations.

With vRealize Business 7, VMware now provides a fast and accurate cost, pricing and reporting engine. This includes automated pricing for vRealize Automation endpoints in order to provide a single source for cost & pricing and having a centralized reporting. 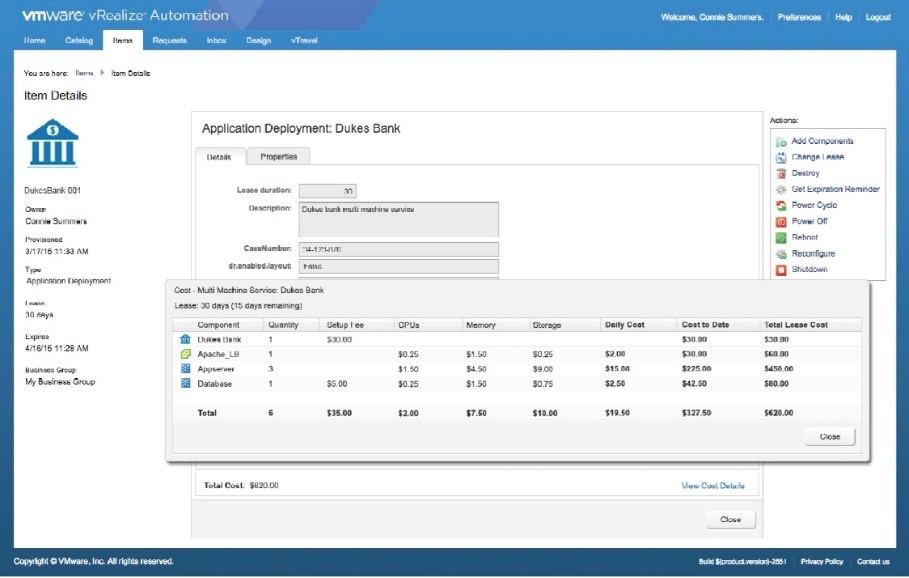 There are also a lot of changes in the new release of vRealize Business. Most notably, all cost configuration has been moved to vRealize Business (e.g. there is no cost profile in vRealize Automation itself). Also, there is a lot more information regarding show back, pricing and cost transparency. Unfortunately, vRealize Business still does not support the pricing of XaaS services.

Fig. 6 shows the detailed pricing information for users about provisioned resources. We will cover vRealize Business for Cloud in detail in a later chapter.

Another important VMware product within the cloud ecosystem is NSX. NSX provides network virtualization and a security platform for the software-defined datacenter. Amongst other things, NSX has the following capabilities and features: 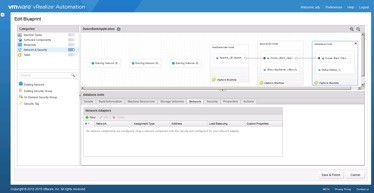 One of the most recent products from VMware is vRealize Code Stream. vRealize Code Stream is technically bundled with vRealize Automation. However, you need to separately purchase this and then unlock its functionality within the graphical user interface by way of a serial number.

vRealize Code Stream helps teams that want to use DevOps practices in their company to become more productive. Basically, the product helps developers with the following features:

Many companies, however, will not purchase vRealize Automation as a stand-alone product, but as part of the vRealize or vCloud Suite, so it makes sense to talk about these licensing options as well.

VMware positions the vRealize Suite as a solution to build an enterprise-ready cloud management platform. This includes the following functionality:

As you know, the vRealize Suite includes a set of products to help you build the aforementioned solution. The list of products includes:

Not surprisingly, the different vRealize editions include a different set of these products. Recently, VMware tried to provide a theoretical framework for delivering these different versions: The editions correspond to different requirements in your enterprise, i.e. if you want to have managed virtualization, intelligent operations, automated IT to IaaS or even DevOps-Ready IT.

There is no need to talk about managed virtualization, because that’s VMware traditional business, the vSphere business. The other initiatives are shown in the following table.

To make things even a little bit more complicated, it also depends on the product edition which features can be used (see the table below):

With the advent of the vRealize Suite 7.0, VMware has also updated its way to license the workload across systems. The new way of licensing workload is called Portable License Unit (PLU) and enables customers to take licenses and use them on-premise or for virtual machines running in the cloud. This also includes non-VMware platforms such Amazon Web Services. One PLU allows usage of vRealize Suite to manage unlimited OSIs/VMs deployed on one on-premise vSphere CPU or up to 15 OSIs deployed on the public cloud including vCloud Air, vCloud Air Network Partners, other supported public clouds, as well as third-party hypervisors and physical servers.  PLU allows the continued usage of current deployments of vRealize Suite even when the underlying infrastructure for workloads change from on-premise to off-premise and vice versa. The licensing metric will be converted automatically, so there is no need to switch the licenses.