This chapter introduces the basics of blueprints and includes some design discussions. The next chapters will show how blueprints can be created and configured.

In short, a blueprint can be described as the specification of the resources that should be deployed, including the respective lifecycle information. In order to be able to fully understand blueprints, we have to address and discuss a couple of issues:

In the following, we will deal with these questions. As soon as we have a clear picture about the fundamental functionality, we can show how the actual configuration and implementation work can be done. 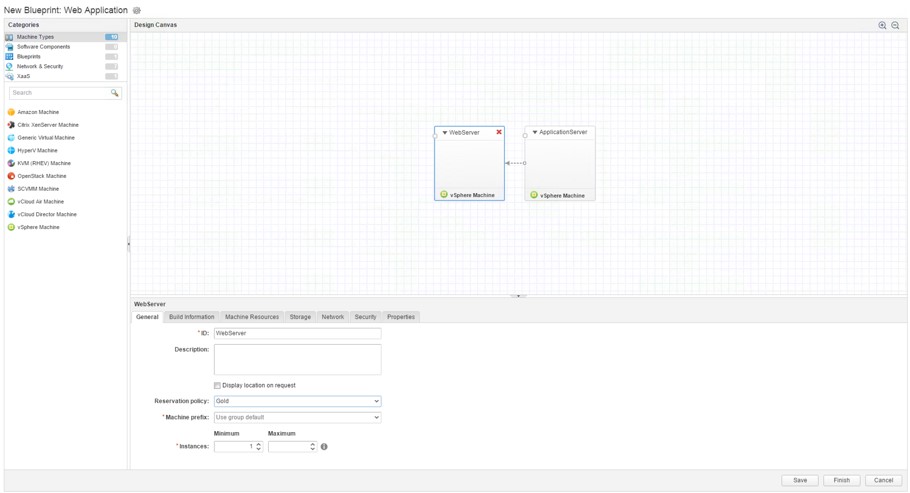 In vRealize Automation blueprints act more as a container element that hosts different kinds of elements to be deployed. The following resource elements can be provisioned from a blueprint:

Based on these elements, blueprints are usually categorized as follows: 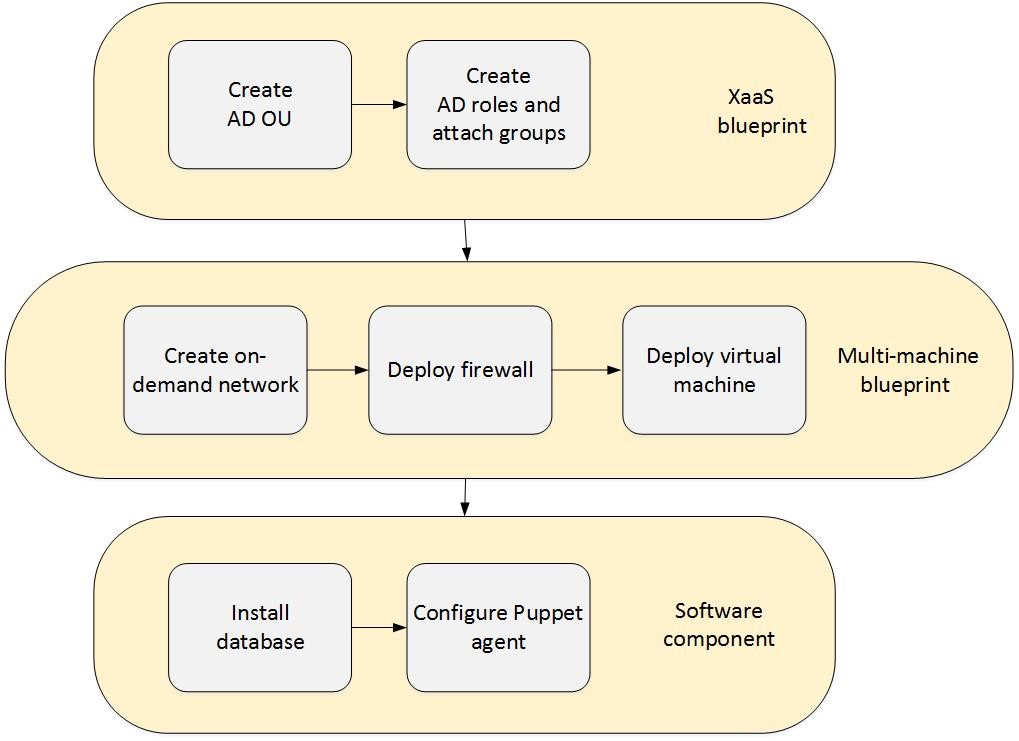 Besides determining what kind of resources should be deployed, we also have to know how a machine is created. vRealize Automation offers several techniques of how to provision an implemented machine. Of course, these mechanisms depend on the blueprint type. The following provisioning types are available for blueprints:

Internally, all the logic behind these provisioning workflows is stored in vRealize Automation, within the Model Manager.

A blueprint defines all aspects of a lifecycle. Besides the question of how to provision a resource, there are other aspects such as approval, managing at runtime, retiring or archiving. The following basic lifecycle stages exist for machines to be provisioned:

Depending on the kind of blueprint, the lifecycle encompasses additional stages. For example, virtual blueprints that are provisioned by cloning can have an additional stage for applying guest specifications to a machine.

The feature set of vRealize Automation is already quite comprehensive. However, as with any standard software, probably not all the requirements of a project can be delivered out-of-the box. There is a lot of room for adaptations in a resource’s lifecycle. Many companies have their own IP address management tool, which should be integrated into the provisioning workflows. For such scenarios, blueprints have a specific extension mechanism. We have already mentioned custom properties several times. These properties can be used to customize the lifecycle of provisioned machines. For example, there is a custom property called hostname, which overrides the hostname normally set by the machine prefix. The other option for implementing extensibility is Orchestrator. We will talk about custom properties in this chapter and focus on Orchestrator later in the book.

While it is quite easy for end users to provision their own machines, the situation might arise at some point in time, where all the available resources for provisioning have been exhausted. In addition, there are costs arising from machines that are not used anymore. To help avoid such issues, machine leases can be assigned. This means, when setting up a blueprint, it can be defined for how long a provisioned machine will be deployed. When the lease is over, the lease has to be extended, otherwise the machine gets archived or destroyed and its resources will be released.

Even when you have machine leases configured, the remaining capacity within your datacenter might become low and no further machines can be created. From an administrator point of view, it is difficult to choose a machine for expiry. This is because in most cases administrators do not have any knowledge regarding machine use (i.e. if it is still needed). In this case, vRealize Automation helps to identify underused machines (in terms of CPU, memory, network or disk consumption). Administrators can then ask the owners of such machines whether the resources are still required. Based on the owner’s reply, the machine resources can be released or still be kept.

While blueprints specify the hardware configuration for newly provisioned machines, changes at runtime are quite common. Such configuration changes are possible if the blueprint is configured accordingly. For example, you can initially assign 4 GB of memory, but later allow end users to have up to 8 GB of memory. At runtime, end users can use actions within the self-service catalog to apply these changes and restart machines with the new settings.

8.1.9 Infrastructure as a code

In previous versions of vRealize Automation, blueprints could only be created and configured via the graphical interface. This has changed now and it is possible to export a blueprint as code (however, this is only possible using the CloudClient or using the REST API). vRealize Automation uses YAML and JSON for blueprints, so a declarative approach for implementing the code is used. Fig 4 shows the YAML code for a simple CentOS machine blueprint.

Having blueprints as code and using this feature has a big impact. First of all, blueprints can easily be created and modified using an editor. Second, new blueprints can easily be uploaded using the CloudClient or the REST API. In addition, if you maintain a source code version system like Git, you can upload your blueprints and keep different versions of your blueprints. Compared to manually creating blueprints, the new approach to have blueprints as code, reduces the chance of human errors. Frequently, you have to create blueprints to different environments, for example you might have a QA or a DEV environment. Often a QA tester discovers a defect due to wrongly configured resources, which could lead to further delay in the test schedule. Hence, the solution to this challenge is to automate these steps by creating a script. In addition, the automation script itself can serve as documentation. Also, automated processes  are more reliable than manual configuration and it certainly reproducible. Last but not least, having your blueprints as code allows you to easily share blueprints with others. 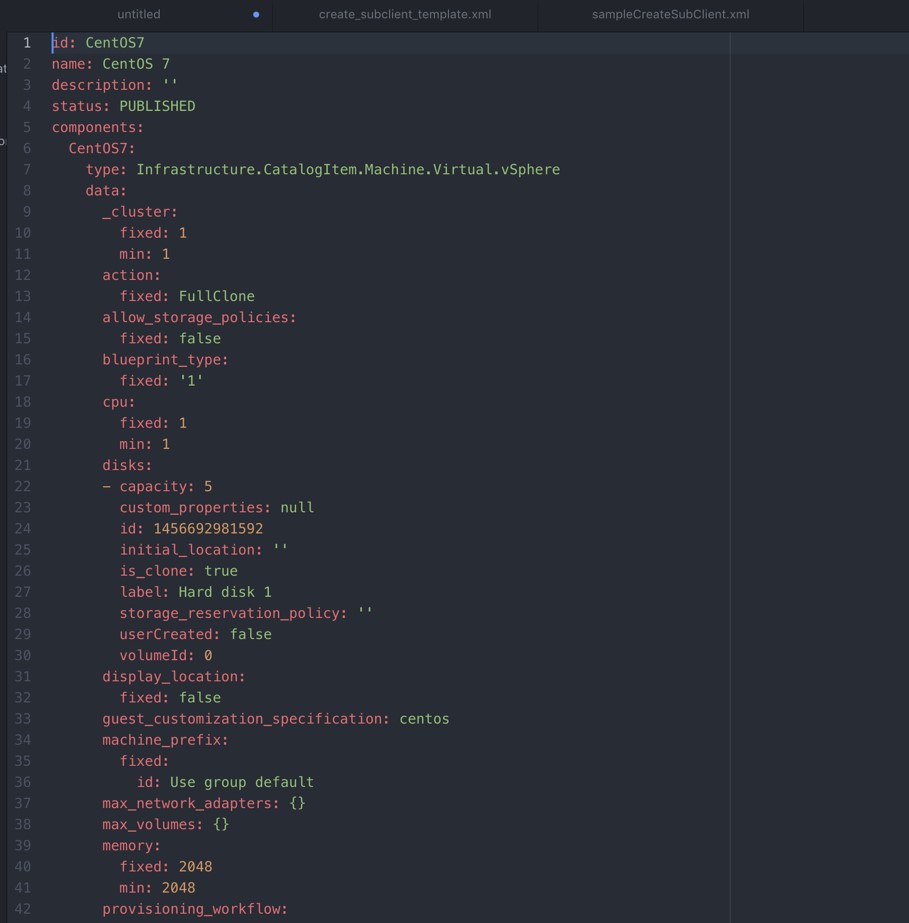 As with any software, errors can also occur in vRealize Automation and especially during provisioning. To troubleshoot these errors, vRealize Automation provides several log files, all of which are viewable from the graphical user interface. These log files serve different purposes, which are described in the following:

In addition, you can also install vRealize Log Insight as a log collection tool, which offers additional benefits:

Before creating and setting up blueprints, there is some work to be done in advance.

When vRealize Automation should deploy a virtual machine based on cloning, the appropriate template has to be set up in the hypervisor before. On the other side, if you use Windows Imaging File (WIM) as your deployment technology, there is a lot of work to be done to get WIM running in advance.

Besides determining and configuring the appropriate deployment technique, there is another important issue: How to configure deployed instances. There are different approaches available for vRealize Automation. The most popular ones can be described as follows:

In practice, finding the right approach for the machine configuration can take some time, as there are different criteria that have to be taken into consideration:

Fig. 5 summarizes these approaches. So, at the end of the day, you will have to decide what tools should be incorporated within the machine template. The following table (see Fig. 6) shows some of the software that is usually installed within a machine template (and hence producing some kind of a base template).

Fig. 6: Software deployed in a base template

In this chapter, we have explained the basics of blueprints and have triggered some design discussions. With that knowledge in mind, we can start with creating and configuring blueprints in the next chapters.