So far, we have discussed various aspects of extending vRealize Automation. This involved using custom properties, the guest and the bootstrap agent along with software components, the vRealize Designer, the vRealize Orchestrator and finally the Advanced Service Designer. However, for the sake of completeness, there are still some smaller topics to be covered. In particular, we want to discuss the following issues:

Basically, Infrastructure as Code can be understood as automating the deployment as well as the provisioning and configuration of an entire infrastructure. Basically, by providing blueprints vRealize Automation already supports administrators to achieve this goal. We have learnt how to create blueprints, but in order to use blueprints in all our environments, there is more to be done: There must be a possibility to export and import blueprints.

As well as being importable and exportable, blueprints can be considered similar to application code. Blueprints can be stored in a code repository and can be version- controlled. This helps to track and maintain different versions of the code and audit changes.

23.1.1 Using the Cloud Client for Infrastructure as Code

Unfortunately, blueprints cannot be imported and exported by means of the graphical user interface. Instead, the Cloud Client is needed. Basically, the Cloud Client is a command-line utility that provides verb-based access with a unified interface across vRealize Automation APIs. This helps users to easily code their own deployment scripts or recipes and integrate them with their own run books while still having the governance and lifecycle management of vRealize Automation.

In particular, the Cloud Client can help in the following use cases:

In order to use the Cloud Client, we have to download the latest vRealize CloudClient. The current version at the time of writing this document is 4.2 (you can find the tool on the VMware Developer Center[1]). Once the tool is downloaded, it must be extracted and finally we can go to the extracted bin directory. Depending on your operation system, either run the cloudclient.bat or the cloudclient.sh script.

Now let’s use the tool to log on to vRealize Automation. First, you should set a couple of environment variables in order to use the auto-login feature of the Cloud Client (the following commands are stored in a shell script in order to provide reusability):

Once, you have saved the environment file, you can load it from the command line similar as shown in the following:

If you start the Cloud Client for the first time, you are asked to accept the license agreement and to add the certificate information to the local Cloud Client trust store. Once logged in, you might receive the message that your session is INACTIVE. Next, log in into the IaaS server:

Next, you can make sure that you are authenticated:

Once these steps are completed, we can begin to work with the Cloud Client shell.

In order to list all available blueprints within your vRealize Automation environment, you can issue the following command (see Fig 1):

When importing and exporting items from vRealize Automation, it is always a good idea to create a package to group items together. First let’s try to show all items that can be managed by using the Cloud Client (not only IaaS blueprints, but also property groups, software components and XaaS items):

Next, let’s create a package to group elements that should be exported and imported as a single unit. This can be done as follows:

However, in order to issue this command, you have to first look up the IDs of the items. Once you have created your package, you can show it via the command line (see Fig 2):

Finally, we can export the package by issuing the following command:

That concludes how to work with the Cloud Client. If you need more samples, you will see additional Cloud Client samples on the VMware download page.

The next step of setting up a real Infrastructure as Code process would be to use a version control system such as Git for storing your packages. Once this has been done, you can even go a step further and use a continuous integration system like Jenkins. Jenkins is an extensible automation server that can be used as a simple continuous integration (CI) server. For all people who are interested in that, there is a vRealize Automation plugin for Jenkins provided by Kris Thieler[2].

vRealize Automation is shipped with a RESTful API that can be used for automation. In order to make REST calls, you can either trigger REST calls from a programming language like Java or .NET, use the curl command line tool or use Postman that eases triggering REST calls. vRealize Automation provides the following REST API services:

As you can see there are plenty of different REST API services available that can be used to configure and manage vRealize Automation programmatically. In addition, VMware provides documentation for the REST API services: 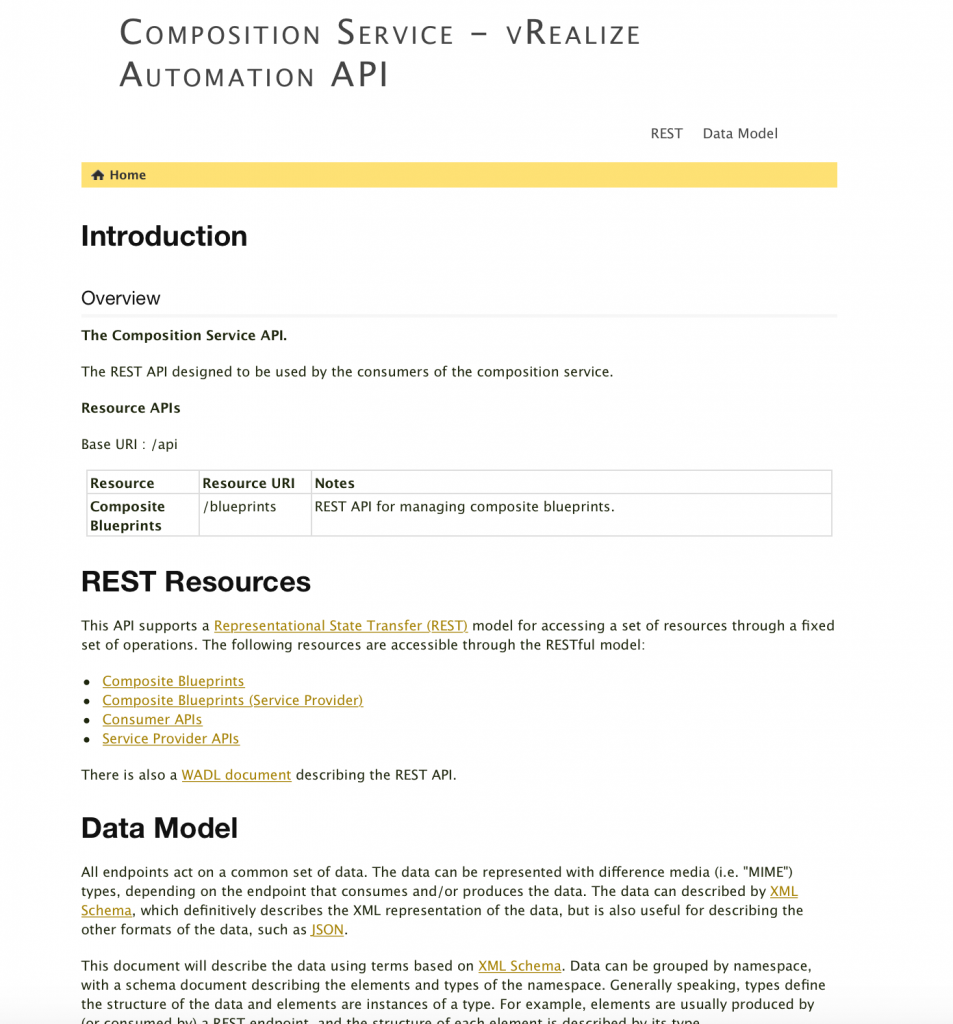 In order to make a call for the bearer token, we need to forward the following parameters to the vRealize Automation server:

When sending a HTTP request via curl, the username, the password and the tenant must be coded as JSON, the host will be the destination where to send the request to. That’s enough knowledge to show a sample request:

The insecure-option is also noteworthy and allows us to call a host with a self-signed certificate. If everything works correctly, the output should look similar to the following:

On the other side, If anything goes wrong, you have to grep the output to find out the possible root cause. The following status codes exist for the bearer token:

Once we have figured out how to request a bearer token, we still need to find a way how to store the bearer token within a variable in order to submit it as authorization header in subsequent calls. So let’s rewrite our curl-invocation:

The fist command stores the result of the curl-command within the DATA variable. We can parse it and store it in another variable called TOKEN. Subsequent request expects an authentication header having the format “Bearer <TOKEN>”, which is prepared in the last command. Such a request looks like this (the following command queries for catalog items within the service catalog):

If you are working a lot with REST API services, you certainly want to have a tool to test your REST invocations before putting them in your script. One of the tools that can help you with that is Postman. Postman allows users to quickly put together both simple and complex HTTP requests. Postman is available as both a Google Chrome Packaged App and a Google Chrome in-browser app. The packaged app version includes advanced features such as OAuth 2.0 support and bulk uploading/importing that are not available in the in-browser version.

Fortunately, the vRealize Automation community also provides a Postman collection. If you are interested in that, you will find the collection at github[3].

While the REST API offers the full-feature set of vRealize Automation, REST programming is still a lot of work. Fortunately, there is a community project called PowervRA[4]. For the initial release, there are already over 60 functions available covering a sizable chunk of the vRealize Automation REST API.

23.3.1 Perform a silent installation of the management agent

23.3.2 Start of the unattended installation

The unattended installation can then be started from the vRealize Automation appliance. However, there is also a configuration file that must be edited. The file is called ha.properties and can be found within the /usr/lib/vcac/tools/install directory. There are plenty of settings to be configured, among others:

Once all settings have been configured, the installation can be finally triggered by issuing the vra-ha-config.sh command in the same directory.

In addition to the silent installation, there is also an installation command line that helps to perform installation adjustments after the initial installation. The command is called vra-command.sh and can help you within the following scenarios: 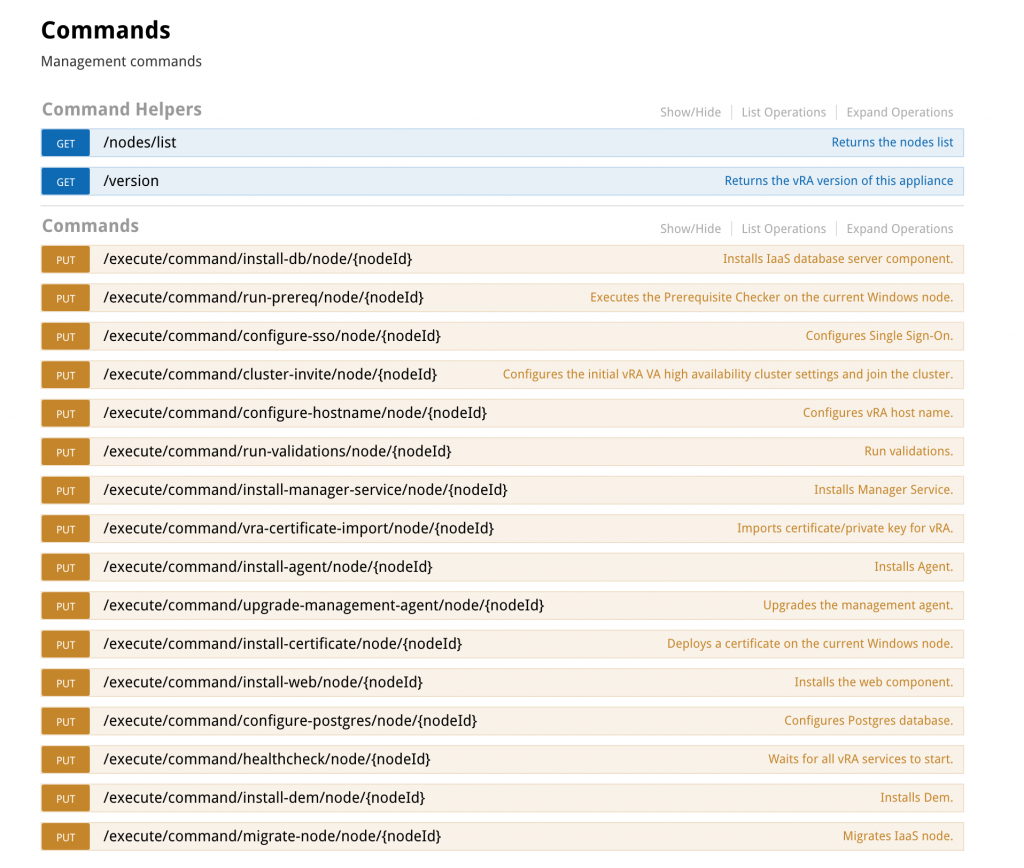 Last but not least, the installation can also be automated using REST calls. vRealize Automation provides a set of guided commands that are accessible via the vRealize Automation appliance VAMI webpage. Similar to the vRealize Orchestrator page, there is a Swagger user interface where all the commands can be seen and tested from. The interface is accessible via the URL https://<vra7-app.domain.name>:5480/config (see Fig 4). We have already shown how to user the Swagger API in chapter 21, so we will not cover how to use Swagger here once again.