Perhaps one of the most inportant pieces in VMware’s strategy to build a software-defined data center (SDDC) is its network virtualization tool NSX. It all started in 2013, when VMware acquired a company called Nicira and since then quite a lot of work has been undertaken to make NSX one of the most interesting and important products in VMware’s product portfolia.

In short, the story behind the product is somehow similar to the one of vRealize Automation. The Nicira team tried to tackle the problem they had seen in large organizations – manually provisioning networks had become a bottleneck. So, similar to vRealize Automation, the initial use case was automation. However, the product evolved in the last years and two other main uses were added: security and application continuity.

As discussed, NSX provides a set of features, which can be summarized as follows:

While the implementation of the first two use cases has recently become quite popular with more and more enterprises, application continuity is something for the future. Hence, we will now focus on network automation and security and provide some additional details of that topic.

As an example, let’s imagine a company that repeatedly wants to provision the same multi-tiered applications to its customers (see Fig 1). The deployment consists of three separated subnets that are connected via a logical switch. In order to provide a high-level of security, firewall rules are enforced on a subnet level and on a virtual machine level. There is a load balancer to be provisioned that distributes web traffic across the web servers in the web subnet. In order to obtain internet connectivity, there is a NSX edge deployed as part of the application stack. Customers can connect to their application environment via VPN. 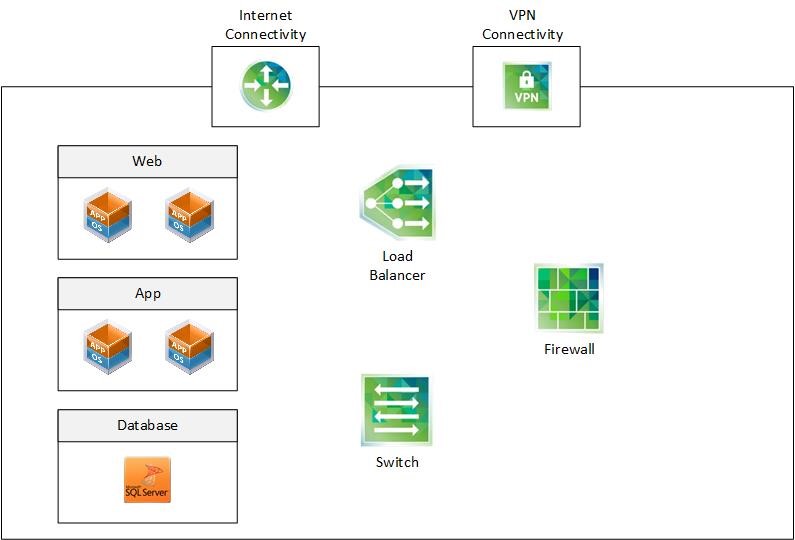 Having both vRealize Automation and NSX available allows to create a standardized repeatable process that helps to accelerate delivery and to reduce the time needed to provision a deployment. In addition, automation greatly improves the consistency and the reliability of the final configuration by eliminating manual errors. Fig 2 shows the combination of both tools which can make the provisioning of complex applications a matter of just a few minutes. 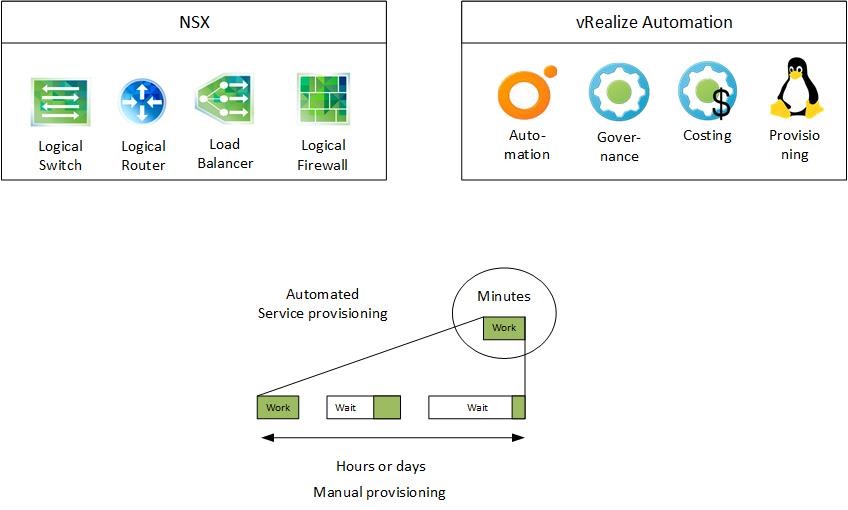 The most well-known use case for NSX is – without doubt – security and micro-segmentation. Micro-segmentation is the ability to filter network traffic at a virtual machine level. This allows organizations to logically divide the data center into distinct security segments down to the individual workload level.

Hence, micro-segmentation can greatly limit the lateral movement within the data center. In traditional data centers, once an attacker has successfully infiltrated the network, it is quite easy for him to move laterally within the data center from workload to workload with only few controls to block him. With NSX however, in case one of many web servers is compromised, network security can prevent an intruder from accessing web servers in the same network.

Recent studies have shown that traffic inside the data center accounts for around 80% of all network traffic. Hence, this is another reason to not only focus on the north-south traffic in and out of the data center, but also on the east-west traffic inside the data center. However, monitoring such a traffic is unequally more difficult as this traffic usually does not pass the security devices at the data center perimeter. However, when monitoring such traffic by using techniques such as hair pinning, network performance issues can arise due to the high amount of traffic. To tackle that problem, NSX monitors traffic at the hypervisor level – near the virtual machine. Consequently, with network virtualization, security is built in the network itself.

In order to limit the scope of network traffic, isolation and segmentation are accepted approaches as well. Isolation as an important principle in network security is traditionally achieved by routing, VLANs, access control lists or firewalls. When using NSX, we abstract from these underlying techniques and focus on higher-level constructs like security groups or logical firewalls. NSX enables organizations to segment data center networks based on logical instead of physical boundaries (applications and compliance scopes instead of physical network location) and to automate the alignment of controls and policies to those logical boundaries. All of this dramatically reduces the cost and complexity of compliance.

Using NSX has also operational impacts. Policy definition becomes an upfront activity that is performed by security architects. Once this has been accomplished, security operators can leverage micro-segmentation for controlling network traffic.

Since recently, VMware tries to provide NSX not only for the internal data center but also to extend it to public cloud providers. At the VMworld 2015, VMware already presented how to extend NSX to Amazon AWS. VMware’s stance is that companies will face a cloud lock-in if they rely on the cloud native network APIs. By extending NSX to cloud providers, customers can program to NSX’s API no matter where the actual workload is running, because the underlying interfaces for consuming load balancing, security and other network services becomes consistent across multiple clouds.

However, vSphere only provides layer-2 switch functionality, higher services such as routing are not part of the product.

In 2010, VMware began to offer layer 3 to 7 functionality as well and published a product named vShield. Later on, in 2013, this product was rebranded in “vCloud Networking and Security” (vCNS). Unfortunately, this very promising product did not gain broad acceptance in the market due to the fact that VMware was not recognized as a strong player in the data center networking market.

In order to change this, VMware acquired software-defined networking startup company Nicira and created NSX by combining the features of vCNS and Nicira.

The functionality of traditional network components such as a layer 3 switch can roughly be divided into three different layers:

Basically NSX also comes with these layers, but with the big difference that there is a central management for these layers.

For the management layer, a dedicated NSX manager (that’s a virtual appliance connected with the vCenter server) is provided. There is a public REST API which is consumed by the vCenter Server, with tools such as vRealize Automation (with the help of an Orchestrator plug-in), VMware Integrated Open-Stack or vCloud Director. VMware used this API to integrate NSX into the VMware web client, so no dedicated tool is used to manage an NSX environment. Fig 3 shows the configuration of NSX edges in the VMware web client. 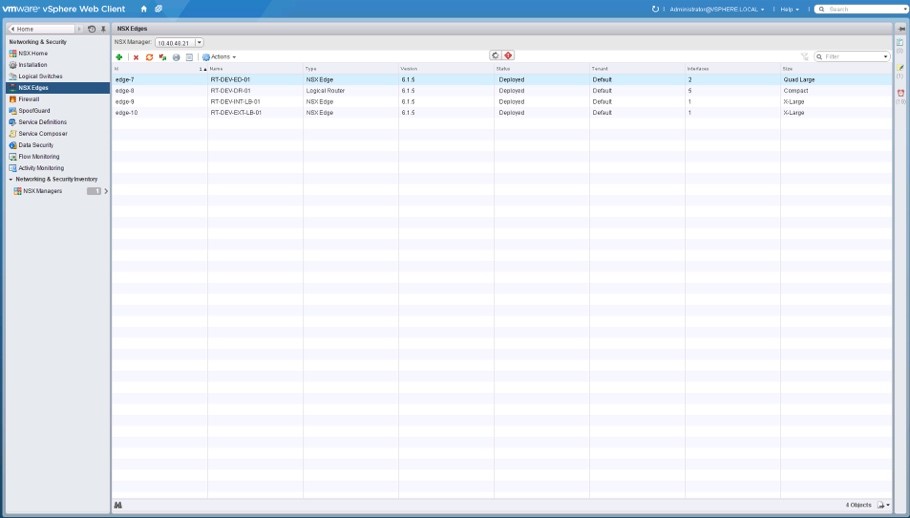 The data plane is comprised of the ESXi nodes itself. The nodes run a distributed switch with additional kernel modules for VXLAN, routing and a kernel-based firewall. This implementation assures an optimal data path for the network traffic within the data center. For outbound communication, on the other side, no VXLAN or kernel-based routers are used – instead, VMware’s approach is to deploy an edge that connects the virtual with the physical world.

Last but not least, NSX must run on top of a physical network. In this regard, NSX is quite flexible and can basically run on top of an arbitrary network environment. There is only one requirement: The maximum transfer unit (MTU) must be increased by 50 bytes due to the overhead of the VXLAN protocol. However, in practice many customers tend to use a stable and powerful network infrastructure in order to use all the potential of NSX. Fig 4 shows the NSX architecture with its different layers (physical network, data plane, control plane and management plane). 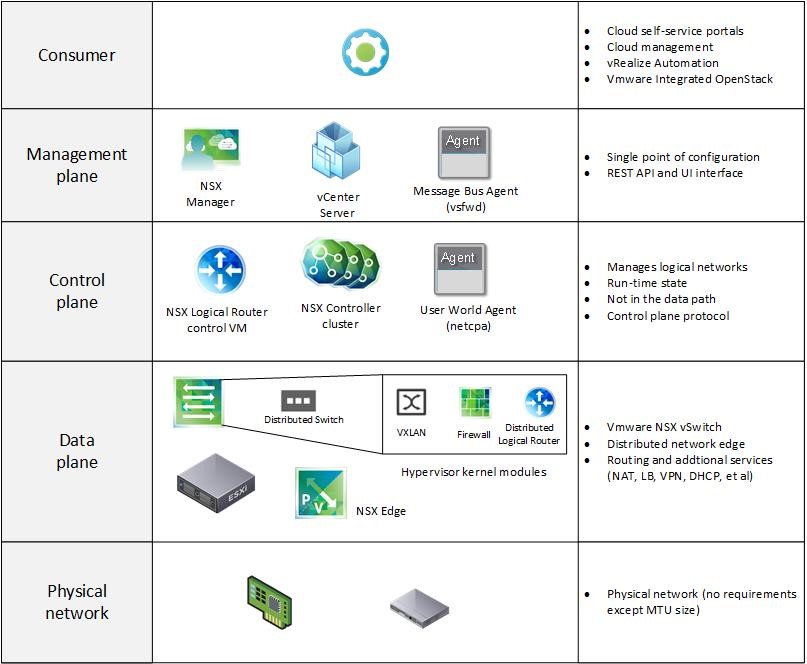 From a technical point of view, once an administrator creates a logical network, NSX will create a port group on all the distributed switches participating within the VXLAN transport zone. If there is any network traffic coming from virtual machines on the same ESXi server, the traffic never leaves the ESXi host itself, instead, communication is taking place within the memory of the ESXi host. In the case of virtual machines residing on different ESXi hosts, a VXLAN tunnel end point (vmkernel port) is used. However, at the end it doesn’t matter in which physical layer-2 network the source or the destination host is located, as VXLAN traffic is encapsulated in UDP and IP packets.

Using logical switches, administrators can create broadcast domains in order to create a context for VMs. Hence, control is possible if virtual machines can talk to each other. As an example, consider a scenario of a typical web application consisting of three different tiers (web tier, application tier and database tier) as depicted in Fig 5. The virtual machines in each tier can talk to each other, but communication between the tiers is not permitted.

As a summary, Fig 6 shows how different logical networks can be connected via a distributed logical router.

Providing sophisticated security and firewall functionality is one of the strengths of NSX, so let’s discuss the most important components:

12.4 Use cases for NSX integration

After having described the basics of NSX, we want to discuss the use cases for a possible integration of NSX into vRealize Automation.